Different Class is the third of a series of novels set in the fictional town of Malbry. It follows on directly from Gentlemen and Players, revisiting St Oswald’s Grammar School (and most of the characters therein) a year after a series of distressing events, which culminated in murder. In narrative terms, it also precedes Blueeyedboy, which is set in the area around the school, and it features some of the main characters. So technically, this is a trilogy (I’ve always rather liked trilogies) although each story stands alone, and can be read in any order.

Click here for a summary of GENTLEMEN AND PLAYERS. 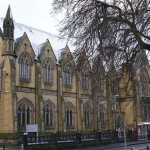 St Oswald’s Grammar School for Boys has been through some rough times over the past year. The murder of a schoolboy; the loss of the Head and several key members of staff, coupled with a disastrous set of exam results, have brought the place to the brink of ruin. Only a Crisis Intervention – designed to salvage failing schools – can save it now, which is why Roy Straitley, the eccentric Latin Master and main protagonist of Gentlemen and Players, is (not quite reluctantly) delaying his retirement for one more year. But a trendy new Head, a Crisis Team, a paper-free environment and a prospective merger with Mulberry House, St Oswald’s all-female counterpart, is only the start of a wave of change that promises to engulf him.

And when the Head turns out to be an ex-pupil of Straitley’s, the boy at the heart of a scandal that ended with a St Oswald’s master in jail, can Straitley’s loyalty survive, or, as he discovers the truth, will he find himself faced with the task of destroying the school he loves?

Are you studying this book as part of a discussion group? Get your readers’ group guide here…

Q: How important it is to have read Gentlemen and Players and Blueeyedboy to understand Different Class?

A: Not very. All three books stand alone, although each one contains clues that may help the reader understand what happens more clearly, or show some of the characters in a slightly different light.

Q: So, how much of the novel is based on real-life events?

A: After fifteen years of teaching in a boys’ grammar school, it must be tempting for readers to assume that the events of Different Class are based on some kind of real-life event. The fact is that real life is nowhere near as plausible as fiction, at least as far as schools are concerned, and if I were to base my books on actual, real-life incidents encountered during my teaching career, the critics would scoff and refuse to believe that any such thing had happened. Having said that, schools are filled with stories; they’re communities in which Tragedy and Farce are only ever the turn of a page away. My teaching career saw plenty of both, and it is inevitable that certain stories, incidents and characters remained in my writer’s subconscious.

Q: Yeah, you say that, but St Oswald’s seems to have a lot in common with Leeds Grammar School, the boys’ school in which you taught for twelve years.

A: It does indeed. The writing process is very much tied up with memory. But St Oswald’s is a construct, rather than a portrayal of any single place. It contains elements of schools (and Universities) at which I was a pupil, as well as the schools in which I taught. Some minor incidents are based on things that really happened. The main plots, however, are mostly made-up, or loosely-based on current events.

Q: Really? Which ones?

A: As I was writing Different Class, I was also watching the unfolding of Operation Yewtree – which seemed to have disturbing parallels with the book I was writing. Again, I didn’t plan it this way. Ideas are like dandelion seeds, landing where the wind takes them. That year, the wind was full of tales of past and present abuses. Some of them must have made their way into the book I was writing. But this isn’t a roman à clef – and I don’t pretend to shed any light on any real-life events or experiences here. It’s just a story about the past; about memory and perception; about loyalty, and childhood, and guilt, and of the dark side of friendship.

A: Well, no; not really. I think my Malbry books are among the darkest stories I’ve written. Although I think of them as comedies, they’re very, very dark comedies, with a broad seam of tragedy running through. There’s a lot of violence and abuse in these stories, both physical and emotional; a lot of disturbing glimpses into the shadows of the mind.

Q: Would you call your Malbry books crime novels?

A: In a way, yes, I suppose that’s what they are; although there are no detectives here, no satisfying solving of mysteries and tying-up of loose ends. Most crime stories are about solving crimes: catching criminals. These books of mine are about discovering things, often things to do with the past, and about how the past never leaves us.

Q: How hard was it to write?

A: I find my “dark” books at the same time curiously satisfying to write, and emotionally and intellectually draining.  But I believe that stories should contain equal proportions of light and shade in order to be meaningful. The monsters of our daily lives are not the demons and werewolves of fairytale, but sexual predators, murderers and those who hide their malevolence behind an everyday façade. Stories enable us to face our monsters, and sometimes, learn to fight back. Facing them isn’t always easy, but maybe that’s the point.

Q: Roy Straitley, the first-person protagonist of Gentlemen and Players and Different Class, seems about as different from you personally as a character could be. What’s it like, writing as someone so completely unlike yourself?

A: I’m very fond of Straitley. One of the reasons I wrote Different Class is that I enjoyed writing his voice so much that I wanted to revisit him. He’s of a generation of teachers that has more or less disappeared; a Latin teacher in a world where Classics has been abandoned; resistant to both modern technology and political correctness, and yet with a moral code of his own, and a natural sense of compassion. He’s far from perfect, however. He’s vaguely uneasy with women; he’s filled with the slightly skewed values of his generation and background, and for all his intelligence, he has a series of blind spots regarding his friends, his prejudices and of course, his Brodie Boys (for Straitley has his favourites, and is blithely unaware of how much this shows). But he is principled, loyal, kind, and when he makes a mistake he’s capable of admitting it with a degree of humour. Perhaps it’s that humour that links us. I’m not much like Straitley in many ways, but we do share a sense of humour (and a liking for Liquorice Allsorts), as well as a kind of nostalgia for a vanished time in teaching. His voice is exaggerated, vaguely theatrical, his speech peppered with random phrases in Latin, and yet I find it surprisingly easy to enter his mindset: perhaps because both of us are performers in our way, both of us engaged in a game of bluff, designed to fool the audience into believing we know more than we do….

Q: What about the second protagonist? What was it like writing that voice?

A: All three of my Malbry books are written in two voices. In each case, the second protagonist has been linked with deception; revenge; even murder. In Different Class, as in G & P, the second voice is that of a pupil, Ziggy, one of three boys connected with a twenty-year-old scandal that ended with a St Oswald’s master – a close friend of Straitley’s – in jail. Ziggy’s diary sheds some light on these events, although Ziggy is not the most reliable of narrators. His secret diary takes the form of a series of letters addressed to a mysterious “friend” known only as “Mousey”, and outlines his arrival at the school, his difficulties settling in, and his growing infatuation with the charismatic English master, Harry Clarke. Nor is Ziggy a typical pupil. He’s by turns manipulative and weirdly naïve; abused, but also abusive. As a victim, he deserves sympathy, but as a human being, he’s deeply problematic. To me that was the hardest part of writing Different Class; the blurring of the boundaries between victim and abuser. When allocating guilt, the truth is rarely as clear-cut as we would like it to be: what I’ve tried to do is portray all parties as honestly as I could, without relying on comfortable absolutes, or making too many assumptions. It was tricky. Life often is.

A: Very probably, I think. Straitley is a tough old bird, and I don’t think his journey is over yet. Plus, the perennial soap-opera of St Oswald’s continues to draw me in (just as that of Leeds Grammar School drew me in, thirty years ago). I may have to revisit, just to remind myself why I left teaching in the first place, and why I’d rather not go back – except perhaps in stories.

Click here for Barry Forshaw’s review in the Independent