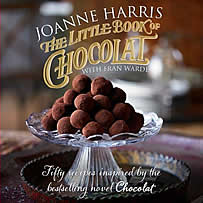 Back in 1998, when I started to write a little book called Chocolat – my third book, and somewhat of a departure from the Gothic pastiches I’d written before – I was completely unaware of the genie I was about to release into my ordered little world. My story, a light-hearted fable set in a not-quite-current France, had as its central metaphor the concept of food as redemption – food, and most precisely, chocolate.

Why chocolate, do you ask? Why not cheese, or chillies, or olives, or bread? I am not a chocoholic: although I do enjoy chocolate occasionally, it’s not among the foods that I could never live without (for that, see the chillies and cheese above). And yet, as I wrote my story, I found myself increasingly fascinated by the history and folklore of chocolate; its capacity to transform and evolve; and of course, the emotional resonance that chocolate holds for so many of us; something that transcends mere taste and becomes a spiritual journey.

I was born in a sweet-shop. A corner sweet-shop in Barnsley, to be precise; a place as far removed from Vianne Rocher’s elegant little chocolaterie as it was possible to be. The shop, which belonged to my grandparents, sold mostly newspapers and sweets, the sweets in glass jars in the window, kaleidoscopic and fascinating. I very rarely ate any. Chocolate, too, was a rare treat – and at that time, generally not of wonderful quality. The kind of boutique chocolate shops that now inhabit the High Street were altogether unknown – except perhaps in London – and the occasional trip to Thornton’s was a very special pilgrimage.

But on my trips to France to visit my French family – trips that coincided with my school holidays – the story was very different. At Easter, in particular, every confiserie – that word that translates as “confectioner” but which holds a wealth of other associations, and which the French high street finds as indispensable as any bakery – was filled with Easter chocolates.

Of course, we had Easter eggs in England. But ours were dull in comparison, gritty, fatty chocolate covered in foil and cardboard, while the French ones were works of art; wrapped in transparent Cellophane, allowing their natural gloss to shine through, tied with artfully-curled ribbons and decorated with clusters of flowers and fruit, cleverly piped on in icing-sugar. Others were made of brightly-coloured papier-mâché, painted with traditional designs and filled with tiny chocolate shapes. Some were small enough to be sold at pocket-money prices; others were set pieces large enough to qualify as sculpture, each confectioner vying with his rivals to create bigger, better, more beautiful pieces.

And the French confectioners did not limit their creativity to decorating eggs. There were also chocolate menageries of hens, rabbits, piglets, ducks – all symbols of prosperity – along with winged bells and paper cones filled with chocolates and toys, like pagan cornucopia. At the time, it seemed to me that this very Catholic country had retained far more of its ancient Easter rituals and images than England, although it could simply be that Catholicism has always had a natural capacity to assimilate and re-invent popular traditions.

Thus, when I was a child I was taught that the reason for which church bells fall silent on Good Friday is that they magically leave their bell-towers, grow angel wings and fly – invisibly, upside-down – to Rome to be blessed by the Pope before Easter. The Pope’s blessings take physical, magical form as chocolate figures – animals, eggs, and of course, those winged bells – which fill the bells as they fly home to ring on Easter Sunday. But as soon as the bells resume their position in the church-towers and start to ring, the thousands of chocolate shapes they contain are flung out all over the countryside. The only way to collect them and to stop them smashing onto the ground is to build a nest and to hide it in the branches of a tree, so that the chocolates land inside. This is why on Easter Sunday, before setting off to church, French children still make nests to be filled with chocolate animals and collected after the service: Catholicism and paganism co-existing happily in a celebration of spring rebirth and spiritual regeneration.

And this was where Chocolat was born, between the beautiful chocolate shops of western France and the close little Yorkshire community that shaped so much of my childhood: a story, not just of chocolate, but of people living together in a place formed by traditions; of insiders and outsiders; of folklore and religion; tolerance and cruelty; feasting, fasting and family.

At the time, I had no idea how far that story was to take me. It gave me wings – just like those bells – and sent me all around the world. A story can sometimes do that, you know: and quite unexpectedly, Chocolat had become one of those stories, linking me with readers from over fifty countries, sending me to Hollywood, boosting me out of my orbit into a new, extraordinary life.

It was the first time I’d really considered the magical powers of chocolate. Papal blessings aside, I was used to thinking of chocolate as a delicious indulgence rather than the stuff of dream. And yet, there is a real magic to this ancient, mysterious substance. And as I learnt more about it – some as research for Chocolat, but much more after the book had come out, as kindred spirits all over the world were impelled to share their experiences and to add their voices to the growing number of people my story had inspired – I realized that there’s a lot more to chocolate than Easter eggs, or chocolate bars, or Cadbury’s chocolate animals. We tend to take it for granted now; chocolate has become an everyday indulgence, and as our taste for it has grown, the range of flavours and quality have also grown accordingly. But the story of chocolate has a magic of its own, and in spite of its popularity, the world’s favourite flavour still retains some of its ancient mysteries. Perhaps you’ll discover a few of them in the pages of this book. Or perhaps you’d rather just indulge. Either way, it’s all right.