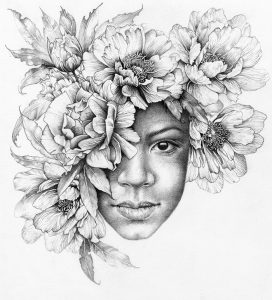 Everyone knows Grimm’s Fairy Tales. Most people could name at least half a dozen of them, although they may not be as familiar with the original versions as they are with the Disney adaptations. Most people know the stories of The Little Mermaid; Hansel and Gretel; The Red Shoes; The Snow Queen; Rapunzel; Snow White; Rumpelstiltskin. These European folk tales form an important part of our literary heritage, and writers and artists have found themselves returning to them again and again. And yet, our own Child Ballads, arguably as rich and important a resource as Grimm, remain largely unknown to the general public, except in the world of folk music, and among academic circles.

That’s one of the reasons I chose to draw inspiration for my three illustrated novellas – A Pocketful of Crows, The Blue Salt Road, and more recently, Orfeia – from Child’s Ballads, rather than choosing a more familiar tale. Child’s Ballads are particular to the British Isles. They speak directly to the history and geography of these islands. They are our Grimm’s Fairy Tales, and we ought to know them better.

So, what are the Child Ballads? They are a collection of 305 traditional ballads, collected and anthologized by a man called Francis Child during the second half of the 19th century. The lyrics and Child’s studies of them were published as The English and Scottish Popular Ballads, and they exist now as a record of the folklore, language and dialects of the British Isles over more than five centuries. Some of the ballads deal with familiar themes. Some are versions of Biblical tales; some tell the stories of folk heroes like Robin Hood and King Arthur – although people who have been brought up with the Hollywood versions of these may be in a for a surprise. Some of the ballads are historical, some fantasy; some are darkly humorous, and some are murder ballads – the folk equivalent of true crime. Most date from the 17th century or later, but some date back to the 14th century; and most exist in multiple variants, changed by region, dialect or simply over the passage of time.

Like Grimm’s Fairy Tales, the Child Ballads are often very dark. Gruesome murder, monsters both human and inhuman, sexual assault, grief, guilt and betrayal feature heavily. Some of the ballads are long and detailed; others exist only as fragments. But as a body of work, they have a definite character of their own, and although Child’s selection of what to include or not to include is perhaps a little eccentric, they form an important link to our shared past, and our shared dreaming.

These are the histories, not of kings and queens, but of the common folk, passed down through generations, not through writing, but through song. They are songs designed to be sung at work; in the home; in the alehouse. Their humour is rude; their view of the world is both bleak, and strangely hopeful.

What they are not is childish, or fanciful, or trivial. Even at their most surreal, they serve as a means of expressing thoughts too subversive, or taboo, or painful to explore without the use of metaphor. They are the songs of revolt against oppression; of anger at the unfairness of life; of hope for a better future; of love and loss and laughter and grief. They are the soundtrack of our shared humanity, depicting the struggle of ordinary folk; their dreams, and sometimes their nightmares. These nightmares are not so different from ours. Monsters of all kinds abound – murderers, rapists, seducers, abusers – and most of their victims are women and girls, crying out for justice.

In choosing Child’s Ballads as the basis for my three folklore-inspired books, I’ve given those women a story outside of their roles as victims. In A Pocketful of Crows, a betrayed woman takes back her power and agency. In The Blue Salt Road, I’ve flipped the traditional narrative of the selkie woman enslaved by human beings, and made it a story of gender and race, seen through the lens of folklore. And in Orfeia, I’ve taken the Orpheus story (told in Child’s Ballads as King Orfeo) and made it the tale of a woman’s grief, a woman’s emotional journey.

And although I quote the original text, I have deliberately chosen to subvert, rather than remain faithful to the original. Anyone who has read The Gospel of Loki will know that I’m interested in retellings that challenge, rather than confirm, the world of the source material. Stories that cannot change are doomed to die and to be forgotten. The Ballads themselves, with their many variants, show how stories mutate and change to suit different times and surroundings. By adapting our stories, we keep them alive. In this way we learn from the tales of our past. In this way we try to correct the mistakes made by our ancestors. And no, they are not comfortable. And no, they are not escapism. And no, in spite of the misleading name, they are definitely not for children.