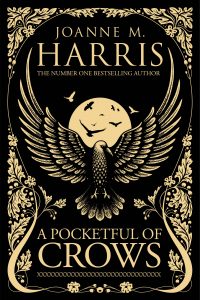 “I am as brown as brown can be,

And my eyes as black as sloe;

I am as brisk as brisk can be,

And wild as forest doe.”

Written in three frenzied weeks following a visit to Skye, A POCKETFUL OF CROWS is a short novel, loosely inspired by the Child Ballad, no. 295, THE BROWN GIRL. Originally written in short form as part of a live Twitter #Storytime, it’s a  dark and magical story of love, jealousy and revenge, in which a nameless wild girl defies her people and follows her heart after falling in love with a human… 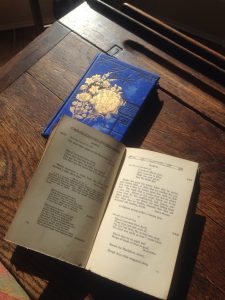 Almanacs, bought from an antiquarian on Skye, from which I drew inspiration for this book; and the old school desk at which I wrote it…

Bonnie Hawkins, and the art of CROWS here. Bonnie and I will be signing prints of these for sale via her website, so get your order in quickly – they’ll sell out fast!

More about the Child Ballads here…

More about working with Bonnie here…

And here’s a link to purchase the #Storytime Band’s CD, based on the novella.

Thinking of studying this book as part of a reading group? Get your readers’ group guide here…

Q & A on A POCKETFUL OF CROWS:

Q: It has pictures! Is this a children’s book?

A: No: it’s an illustrated book for adults, in the tradition of old-style fairytales. Given the themes, I’d say it’s suitable for adult and teenage readers , rather than younger children.

Q: You narrated the audiobook this time! What was that like?

A: People have been asking me for years to do one: this time I decided to give it a try. It was lots of fun -and only 4 hours and 12 minutes long, which meant I could do it in a day…

Q: What world is this story set in?

A: I’ve been exploring different kinds of narrative for some time; looking at the way stories change when they’re read aloud, illustrated or put to music. This book ties in with a longer project (HONEYCOMB), and although the story can stand alone, it’s set in the same universe, which is also the Nine Worlds of my RUNE books and of GOSPEL OF LOKI. It’s a world very like a version of our own, in which magic exists alongside the everyday, and in which it is possible to pass between Worlds – and, perhaps, even into our own.

Q: Tell me more about the heroine of the story.

A: She is one of the Travelling Folk – travellers, both in the itinerant sense, hence her dark skin, but also into other creatures. Their power allows them to “go into” wild animals; to fly with the hawk, run with the deer, hunt with the wolf. They are nameless, for “a named thing is a tamed thing”, and their power lies in their closeness to the wild. But the girl, who is only fourteen when the story starts, find herself falling in love with a young man from a wealthy family, and allows him to give her a name – Malmuira – which results in the loss of her powers and her estrangement from her people. The story, which follows the course of a year, from May Eve to the following May Day, is a coming-of-age for the wild girl, and the story of her struggle to get revenge and to regain her powers.

Q: There are a lot of little folk sayings in there. Are they real, or did you make them up?

A: They are real; taken from various collections of folk sayings, as well as the almanac I bought on Skye, which provided most of them. Some are well-known, others obscure; I liked the idea of giving them new life.

Q; Nature seems to be very important in this book.

A: It is: partly because it’s a kind of almanac of the months, and partly because my main character lives so close to Nature. I wanted to convey the beauty, but also the danger of the wild; the impact of the weather and the elements on someone who lives mostly outdoors; the foraging and hunting for food; the closeness of Death.

A: At least one, I think – a standalone, inspired by a Child Ballad and also set among the Travelling Folk, but with different characters. I like the novella length: it allows for a different kind of storytelling (and illustration, of course): and I like the idea of using Child Ballads as a starting-point for something more elaborate.