This was a tricky one. One of the questions I am always asked is; “Why do you write about France when you live in Yorkshire?” There are many answers to this, but one of the principal reasons is the happy writer’s motto; Never too close to home. Because my books already borrow quite a lot from members of my family, their history and their memories, I have to be especially careful not to go too far, not to re-open old wounds. So far, so good. But Coastliners is different. The story behind Coastliners hasn’t ended yet, and may never do so.

For many years, my grandfather had a beach house on an island off southern Brittany. Every summer (and sometimes at Easter too) I spent my holidays there, six or seven weeks at a stretch, running barefoot, fishing, sailing, exploring the woods, and this went on until I was in my twenties. It was a large, though primitive house, with enough space for three families to stay at a time, and my grandfather’s dream was to be there with his three daughters, their families and their children, all together for the holidays. After his death, the plan was that his three daughters would share the house and continue as before. However, these things rarely work out as planned. Death – and its promise of inheritance – brings out the ugly in people, and the three sisters could not agree how to proceed. They were faced with a choice; to sell the house and split the proceeds, or to let one sister buy out the rest. Only one of them could afford to do this – and then only for a fraction of its value. Result; two sisters gave in to the third, giving up the house for an absurdly small sum so that it would not be sold to strangers. The next year, the third sister demolished the house and built (at great expense) a far more prestigious one on the remains.

I still visit the island once a year, but I don’t go to the house. The past is an island with no ferries or bridges, and my visits are never entirely happy. 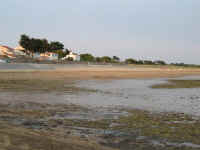 The place I knew has vanished, except for the things which have found their way into this book. I built the island of Le Devin from these fragments, and now when I open maps of the region I almost expect to see it there.

A few years ago I returned to a beach I had loved as a child to find that it had vanished. In the place of the sand there was nothing but a causeway of stones, with a few beach huts towering above them.

Later, I learned why. And that became this story.

The story is set on the tiny island of Le Devin, off the Brittany coast. The ageing population consists of two communities; the wealthy La Houssinière, which covers the most habitable part of the island and which is favoured by tourists, and Les Salants, an impoverished, anachronistic fishing village with little to recommend it to outsiders. Rivalry has existed between the two communities for years. The main point of contention between them is La Houssinière’s complete control over the island’s only beach and the source of its prosperity.

Into this arena comes Mado, a spirited and independent young woman who left the island with her mother ten years ago, returning now to Les Salants to care for her ailing father. Dogged by prejudice, she manages nevertheless to make a life in the community she has always loved, but finds it threatened, both by serious tidal erosion as well as by the influential Claude Brismand, a local entrepreneur and owner of the island’s only hotel, whose plans to buy up land in Les Salants upon which to build holiday homes is becoming increasingly more aggressive. When Mado realizes that a new sea wall, built by Brismand at La Houssinière to protect the beach, is directly responsible for the damage to Les Salants, she attempts to redress the balance. With the help of Flynn, an itinerant beachcomber and one-time engineer, she and the rest of the villagers of Les Salants formulate an ambitious and secret engineering project to attack the beach and to take it for themselves…

I’m very fond of the characters in this story. I’m especially fond of Mado, that prickly, arrogant young woman, so full of good intentions, so deeply incapable of expressing them. I enjoy flawed characters (I enjoyed Reynaud in Chocolat so much more than I did Vianne), and she and I have some things in common. The other characters are mostly taken from my original island (although the two old nuns have something in common with the Crow Girls in Charles de Lint’s lovely books), especially Toinette, who lived next door to us with her tribe of feral cats, drinking a bottle of wine a day and eating snails from the woodpile; and the rival fishermen Aristide and Matthias. I’m also very fond of Brismand, the (for me) peculiarly charming villain of the piece; the late and wonderful Yves Montand would have been terrific in the film adaptation, and he is the one I always imagined in the role.

Reading this book as part of a discussion group? Get the reading group guide here.