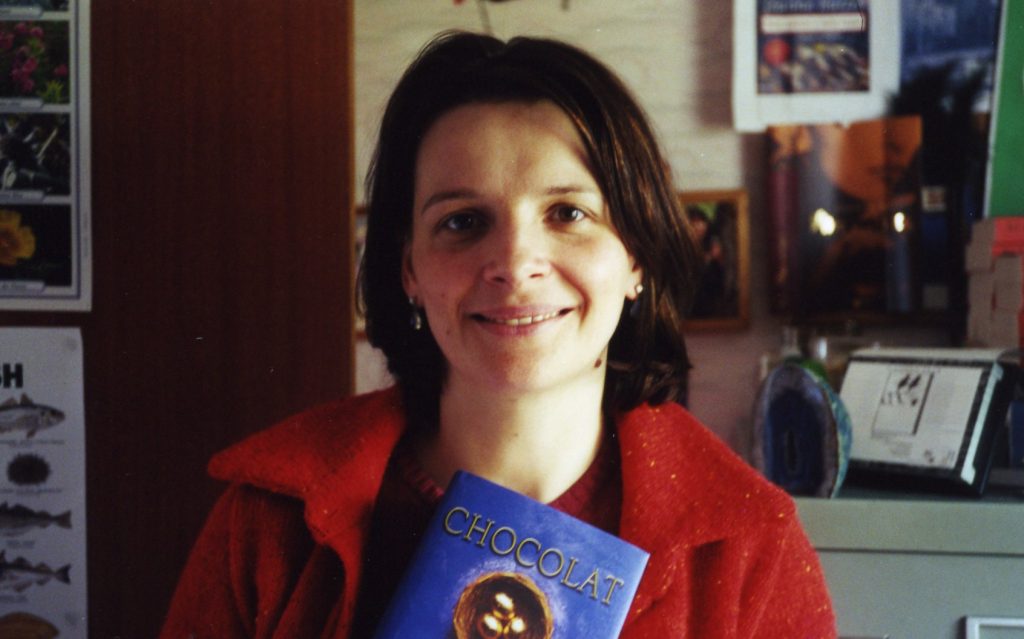 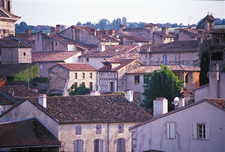 Chocolat begins with the arrival in a tiny French village of Vianne Rocher, a single mother with a young daughter, on Shrove Tuesday. As the inhabitants of Lansquenet-sous-Tannes clear away the remains of the carnival which heralds the beginning of Lent, Vianne moves with her daughter into a disused bakery facing the church, where Francis Reynaud, the young and opinionated curé of the parish, watches her arrival with disapproval and suspicion.

When he realizes that Vianne intends to open a chocolate shop in place of the old bakery, thereby tempting the churchgoers to over-indulgence, Reynaud’s disapproval increases.

As it becomes clear that the villagers of Lansquenet are falling under the spell of Vianne’s easy ways and unorthodox opinions, to the detriment of his own authority, he is quick to see her as a danger. Under Vianne’s influence an old woman embraces a new life, a battered wife finds the courage to leave her husband, children rebel against authority, outcasts and strays are welcomed… and Reynaud’s tight and carefully ordered community is in danger of breaking apart. As Easter approaches, both parties throw themselves whole-heartedly into the preparations; Vianne for the chocolate festival she plans to hold on Easter Sunday, Reynaud into a desperate attempt to win back his straying flock. Both factions have a great deal at stake; the village is bitterly divided; and as the big day looms closer their struggle becomes much more than a conflict between church and chocolate – it becomes an exorcism of the past, a declaration of independence, a showdown between dogma and understanding, pleasure and self-denial.

My daughter was three when I wrote Chocolat. She is one of the main characters in the story, as is her imaginary rabbit, Pantoufle. I like to think that was what began it; for the first time I felt ready to write like a mother, to try and express some of what it felt like to me. That started me thinking about my own mother and the members of my family, in France and elsewhere, and that’s why so many of them are depicted in this book. My great-grandmother, especially, to whom the book is dedicated, is a strong influence, being at the same time a wonderful cook, a powerful matriarchal figure as well as being (as I remember her best) a lively, eccentric and generous Mémée. Denounced from the local pulpit for daring to send her son to a secular school rather than a fee-paying Catholic one, she was the template for both Vianne and Armande, and her picture is on the back cover of the book, just as I remember her, in her garden with her milk-jug in one hand. Armande’s red petticoats belong to her, as does the manner of Armande’s death, her refusal to conform and her impudent zest for life. Vianne’s belief in magic also belongs to her, as do many of her recipes.

I first planned out this story during the Easter holidays, and so it seemed natural to me that I should set it at that time. Easter to me has many memories and associations, all of them French; elaborate carnivals, egg-hunts in my great-grandmother’s garden, the story about the flying bells, the exquisite displays in the windows of the confiseries and pâtisseries. The Catholic church, of course, still so influential in French communities. And chocolate. It seems very strange to me that Easter should now be so closely linked with fasting and self-denial. Originally Easter was a time of feasting and celebration and the rebirth of Spring. The pagan traditions which still survive all prove it. And it’s ironic, too, that we should have come full circle. The shops are never so full of temptations as they are at Easter. I wanted to write a book about that conflict between indulgence and guilt, with chocolate as the central metaphor. 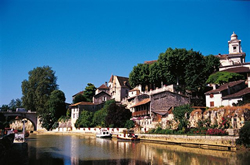 I also wanted to write about people, and about how the arrival of a single individual can affect the internal politics of a community. My books often focus on small communities and the interaction between their inhabitants. The smaller the group, the more dramatic the consequences when someone introduces change. Lansquenet is not a real place, though it is closely based on a little town I know well and I have tried to make it as authentic as I can. It could be anywhere. The rivalries and jealousies of people are almost the same wherever you go.

Nor is the book set at any particular time. I deliberately wanted to give it an old-fashioned feel, to suggest that this was a place where nothing had changed in many years, whilst retaining some elements of modern life. There are still many rural communities in France – especially in the south – where this remains a true depiction, but Chocolat was never intended to be an accurate representation of “today’s France”. It is a France seen through a very selective, very personal filter which has as much to do with nostalgia as with present-day realism.

Lastly I wanted to write about magic. Not the popular view, but about the magic of everyday things and the way something quite ordinary can, given the right circumstances, take on extraordinary properties. Vianne’s belief in the supernatural seems dangerous, even sinister, to Reynaud. And yet it is her very human qualities – her understanding and her kindness to others – which make her what she is. She does nothing which could not be achieved by purely ordinary means. Her magic, working as it does through simple pleasures, is accessible to everyone. If she is a witch, as Reynaud believes, then so is anyone else with similar values. We live in a world which is becoming increasingly complicated around us; we are bombarded with mixed messages and impossible targets from the media; like Reynaud we have learned to demonize pleasure and to be afraid of our feelings. Chocolat was my reaction against that; a plea for tolerance of others but also of ourselves, a reminder that to be fallible is both natural and allowed; that self-indulgence isn’t always bad; that testing people to destruction isn’t the way to make them better people.

There are no real heroes or villains in Chocolat. Even Reynaud, with his intransigence and his dark past, is more of a victim than an oppressor. His deep insecurity and his desire for order reflect Vianne’s own need to belong, and her fear of being rejected. Nor is the Catholic church the villain of the piece; Reynaud uses his own interpretation of Catholicism to enforce his own agenda of control and self-denial. Vianne does the same in a gentler way, but she too has preconceptions and prejudices, and like Reynaud, she is a victim of her past. I see Vianne and Reynaud as two sides of a single coin; closer in terms of their background, their fears and their struggle for dominance than anyone else in the story. To me the real difference between them is that Vianne is a mother, whereas Reynaud, ironically, is a Father only in name.

For in Chocolat it is love, and not faith, which ultimately holds the key to salvation. Reynaud fears love (and pleasure, which he equates with sin), whereas Vianne embraces it and encourages its free expression. Because of her love for her daughter Vianne must try to exorcize her past; Reynaud is condemned to relive it in sterile isolation. But no-one in this story is beyond redemption; Vianne and Reynaud are both forced to confront their demons in the end, and I like to think that they both learn something about themselves in the process, and are both able at last to rejoin the human race.

Thinking of studing CHOCOLAT as part of a reading group? Here’s a handy guide that might help… 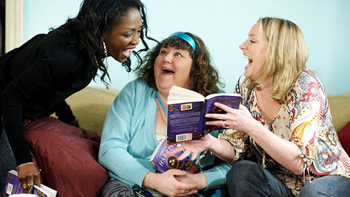 The film of Chocolat

Here are some pictures I took on set…

Lasse Hallström’s film of Chocolat (Miramax, 2001, script by Robert Nelson Jacobs) is in many ways very true to the original. It has been sweetened to some extent, and simplified to meet the needs of a cinema audience, but I think the adaptation is fair and remains close in spirit, if not always in detail, to the book. Most importantly, it is immensely enjoyable – if the book has a message, then it is that enjoyment matters – and although readers may feel that the film occasionally lacks edge, I think it more than makes up for it in simple charm. The ensemble of the cast is wonderful; with Juliette Binoche a luminous Vianne; Judi Dench a tetchy Armande with a dirty laugh; Alfred Molina a hulking, intense but oddly vulnerable Reynaud. The visuals are stunning, especially the interiors – you can almost smell the chocolate – and the inclusion of a Mayan fairytale backstory works very well alongside the 50s French nostalgia. As adaptations go, this seems to me to be a sensitive and faithful one; certainly not as dark as the book, but I like milk chocolate too.

For more on the filming of Chocolat, see my Telegraph article from January 2001.